A diorama of both the Wolf Man with his gypsy helper, Maleva. This piece is a blending of two kits. The Wolf-Man is a separate kit by itself. Subsequently, the gypsy and the base were made to compliment the Wolf Man. Painting all the designs on Maleva’s clothes was quite a challenge.

Larry Talbot (Lon Chaney, Jr.) returns to his ancestral home in Llanwelly, Wales to reconcile with his father, Sir John Talbot (Claude Rains), after learning of the death of his brother. While there, Larry becomes romantically interested in a local girl named Gwen Conliffe (Evelyn Ankers), who runs an antique shop. As a pretext, he buys something from her, a silver-headed walking stick decorated with a wolf. Gwen tells him that it represents a werewolf (which she defines as a man who changes into a wolf “at certain times of the year.”) 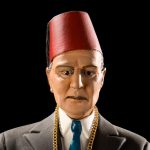 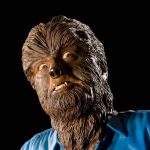