This piece depicts the infamous deleted scene (and subsequently restored) from the 1931 film when the monster, out of “boat daisies”, decides to see if little Maria can float like a daisy and throws her into the lake.

Henry leaves to prepare for his wedding while Dr. Waldman conducts an examination of the unconscious creature. As he is preparing to begin dissecting it the creature awakens and strangles him. It escapes from the tower and wanders through the landscape. It then has a short encounter with a farmer’s young daughter, Maria (Marilyn Harris), who asks him to play a game with her in which they playfully toss flowers into a lake and watch them float. The monster enjoys the game, but when they run out of flowers, tragedy occurs. Due to his defective brain, the monster thinks Maria (unable to swim) will float as well as the flowers, so he picks her up and throws her into the lake, and the girl drowns. Realizing he has made a terrible mistake, the monster walks away feeling troubled and remorseful. This drowning scene is one of the most controversial in the film, with a long history of censorship. 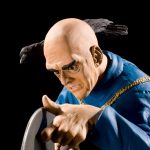 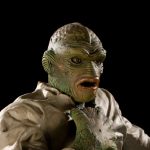 The Creature Walks Among Us (1956)Universal