Universal Studios’ makeup maestro Jack Pierce is partially through the makeup job in preparing Karloff for the role.  Of all the models I have built, this one is my favorite.

From Wikipedia’s entry on Jack Pierce:

Pierce’s reputation was as bad-tempered, or at least extremely stern, but his relationship with Karloff was a good one. They both cooperated on the design of the now iconic make-up, with Karloff removing a dental plate to create an indentation on one side of the Monster’s face. He also endured four hours of make-up under Pierce’s hand each day, during which time his head was built up with cotton, collodion and gum, and green greasepaint, (designed to look pale on black and white film) was applied to his face and hands. The finished product was universally acclaimed, and has since become the commonly accepted visual representation of Mary Shelley’s creation. 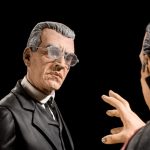 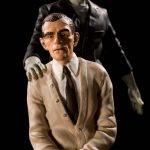 Boris Karloff and the Monster (1931)Universal