This scene depicts a key scene near the end of the Bride of Frankenstein film when the monster is ready to attack Pretorius. Dr. Frankenstein and the Bride are reacting to the monster’s anger. “You live! We belong dead!” This scene is a blending of three separate kits. Much of the bench bling was obtained from many sources, some scratch built, and scattered about to enhance the diorama.

The film follows on immediately from the events of the first film, and is rooted in a subplot of the original novel, Frankenstein (1818). In the film, a chastened Henry Frankenstein abandons his plans to create life, only to be tempted and finally coerced by the Monster, encouraged by Henry’s old mentor Dr. Pretorius, into constructing a mate for him. 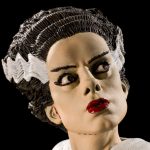 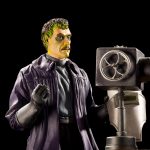