Lucio Fulci’s film, Zombie, was a tour de force in the zombie world. This version of one of the risen dead, released by Resin Realities, includes a base with Fulci’s name partly engraved on a tombstone. All paints were acrylics and added layer after layer to achieve the final effect. Of note are the worms in his right eye, quite a site from the scene in the film that features this particular zombie. 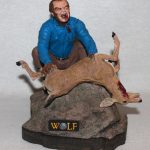 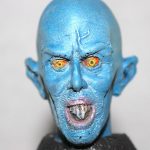