A favorite film that does not get much attention is Squirm, the “crawling terror”. After seeing the scene of pulling worms out of his face you will never be the same again. This version of that infamous scene was manufactured by the kind folks at Alternate Images. The real challenge was painting all those worms. Just do them one at a time and they eventually were done. All paints were acrylics. 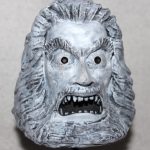 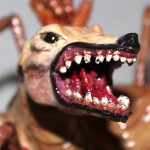